I am very fascinated by the wine you get from blending Cabernet Sauvignon and Sangiovese. These are two very different grapes with very different flavor profiles and instead of clashing they accentuate each other in a beautiful way. Sangiovese has a lighter fruitier strawberry nose which floats above the heavier blackberry and dark cherry of the Cabernet Sauvignon. The depth in the Cabernet with earthiness, cedar and laurel spices are not drowning out the Sangiovese which holds its own with its lighter vanilla spiciness. It reminds me of a duet between a soprano and a bass singer, you can hear each one distinctly since they sing at different frequencies.

This fascination led me to create a blend from the two grapes and our West Tuscan Cuvée is styled after the increasingly popular Super Tuscan wines from Tuscany in Italy.

The wine classification system DOC in Italy defined Chianti wines , which was the main stream wine in Tuscany for centuries, as a wine including Sangiovese and some other stipulated regional red as well as white varietals. The wines were usually very easy to drink, sometimes a bit thin due to the amount of white grapes in some blends. They were often sold at very affordable prices in wide bottles enclosed in straw baskets. Remember using them as candle holders?

Italian winemakers who wanted to create better wines started to experiment with other grapes and in the 1970s new wines were introduced where Sangiovese was blended with Cabernet Sauvignon and other Bordeaux grapes as well as aged in oak barrels. The result was outstanding wines with bigger, bolder and more complex flavors, but they were not allowed to be called Chianti. Instead the winemakers came up with their own names  and even though they could not be classified DOC, but had to be labeled as table wines, the result was outstanding wines sold at much higher prices than traditional Chianti wines.

Today these wines are often called “Super Tuscans” and the best are sold at well over $100. Most of them contain Sangiovese, some 100%, some blended and some have no Sangiovese at all. My personal favorites are the ones with Cabernet Sauvignon and Sangiovese and that is what I try to emulate with my West Tuscan Cuvée. 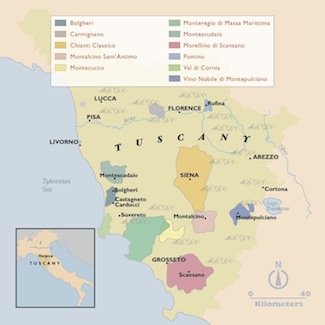