What about all this rain the past months and your vines? That is a question I have been getting a lot lately.

Since October we have had 68 inches of rain, which is over 50% more than our normal rainfall. And a lot of it came in just a few months January-early March. Overall I am very happy about all the rain this winter for our state and for our vineyards. It means that the reservoirs are full, that the snow pack in the Sierras is deep and will act as a deposit of water for the summer season. Over time more rain is creating more water in the water tables so all in all it is a very good thing. As a matter of fact northern California is now officially drought free. 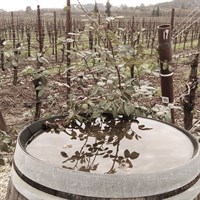 There can be too much of a good thing and some winegrowing areas in California have been less lucky. Especially in places where the land is so low and close to rivers that the vines were standing in water and they could not be accessed for pruning. You need to prune the vines before the dormant winter stage is over.  Vines come to life again during bud break which normally happens in March.

Then there are some areas which have had water flooding the fields for weeks which presents a real problem for grape growers there. Vines are resilient and a few days in water will not be a big problem, but if days become weeks it will impact even dormant vines. Vines that have their root systems submerged in water for weeks will suffocate because of lack of oxygen and important nutrients can be lost as they leak out of the soil. Vineyards on steep slopes on the other hand run the danger of erosion with lots of rain at the same time.

At West Wines we have seen lots of rain but luckily no erosion in the upper hillside vineyard  and even our fields on the valley floor have had enough run off to dry out after a couple of days after each rain storm. That is a big relief since replanting; fixing damages and the loss of grapes for coming seasons would be costly. Now we are looking forward to the 2017 season with ample supply of water deep down in the soil. The nice warm weather of the last weeks has brought out buds turning to green leaves on all the vines. Soon the flowering will start and then we need to worry about frost at night. But then someone once told me “to farm is to worry”.

In the meantime I will enjoy releasing our 2015 Viognier and our 2010 Cabernet Sauvignon Reserve next weekend. Cheers!